One of the more interesting tasks of the Inner Order, in my less than humble opinion, is the making of one own Tarot deck. I was first exposed to this concept, individualizing the Tarot, when I was a member of Hathoor Temple; in Portal, one had to produce several cards to prove that one could do the entire deck if called upon to do so.
It was a small task. Much easier than the way it was originally planned in the original Golden Dawn (RR et AC) which wanted its members to make an entire Tarot deck, a task that fell by the wayside. (Due to the task being hard to accomplish, and natural wear and tear, we end up with only a few decks actually being made, or so it would seem based on the information in my possession.)
There are a couple of reasons why the original Order wanted its members to do this task. The first being that Tarot decks were rare in England at the time; most of the decks that could be brought were of Italian origin. The other, and more important reason, is that the Golden Dawn Tarot differs from other Tarot decks, especially in the Major Arcana.
Yet the weight of the task ensured that it would be one that fell by the wayside when corners started to be cut. But it never disappeared completely. 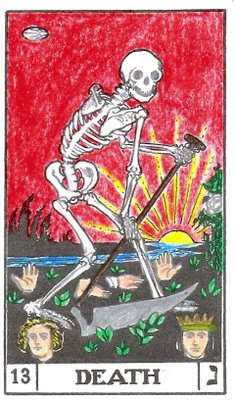 The BOTA version of the Death card.
For instance, Paul Foster Case, the person behind BOTA (Builders of the Adytum), had the members of BOTA handcolor a outlined Tarot deck. It is a compromise between doing the entire deck and not attempting the project in the first place. Case was a former member of Alpha and Omega (AO), the branch of Golden Dawn that Mathers controlled after the revolt of the Adepts. Case himself would have troubles with Moina Mathers, an event that led to the formation of BOTA.
Quite frankly, I have never been completely happy with the BOTA deck. For instance, Case issued an exact color scheme for each of the cards. Looking at the current card that I am studying, the Death card, I find that it has way too much red for my individual tastes. I understand its place, but I think that it is emphasized too much. 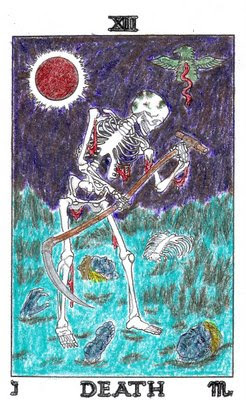 The Death card from the Classical Golden Dawn Tarot
Fortunately, I have never been a stickler for obeying instructions. Even better nowadays, I have another deck option, thanks to Richard Dudshus and David Sledzinski.
Several years ago, when the Ciceros published their Golden Dawn Tarot deck, I moaned "Why couldn't they issue a version in black and white?" I liked the deck at the time; since then, I have grown a little leery of it considering the differences between it and the results of my own studies.
For instance, on the Cicero version of the Death card, they have a fish and a scorpion. Inside a Golden Dawn setting, is it really necessary to include these symbols.
After all, the card is associated with the Hebrew letter Nun (the name of the letter means "fish") and is assigned the Zodiac sign of Scorpio. If you know your correspondences, you really do not need the hint on the card. (The Thoth deck also has a fish on it, but that deck is used in a different setting.)
So why go to all the trouble of coloring one own Tarot deck?
Case believed that coloring the Tarot helped make it part of your mental furniture, that it helped one make a connection with the symbolism of the cards. I agree with his conclusion. I just wished that he used a deck more in line with the Golden Dawn symbolism and a different color scheme.
But as I said, I do have another option today.
When coloring the Tarot, one should notice what one thinks about. For instance, when coloring the classical version of the Death card (a task that is assigned to the Adept Minor Grade by the Inner Order teachings that I follow), I found myself wondering whether the hanging tatters on the skeleton were the remains of a robe or whether it was the remains of decayed flesh. In the end, I decided that it is probably both.
And it is little thoughts and questions like that make coloring, or outright creating from scratch, your own Tarot deck worthwhile.
Posted by Morgan Drake Eckstein at 12:02:00 PM