So I decide to write about the extra days of the Egyptian calendar...and then I put it off and off...because I obviously need extra days to write it myself (there is also that small matter of falling into and crawling out of a depression). And at the last moment, when my mind is finally boiling, I lose the internet. Yes, it is going to be one of those posts.

Originally, this blog post was thought of as part of the Tarot Blog Hop. But by now, I should have been removed from the list. (Oh goody, I hear a cat throwing up.) So in theory, some of you were supposed to be coming from Joy Vernon's blog http://joyvernon.com/Blog/in-the-belly/ and then proceeding to the US Games' blog http://usgs.typepad.com/blog/2013/02/imboc-tarot-blog-hop.html and all I have to say is so much for that theory. By now, given the time, I should have been removed from the master list, and work-arounds should be in place. (I am not really sure...because the journalist in me is more concerned about finishing this post than checking the damage report.)

Please visit both Joy and US Games. I am quite sure that they were more up on the ball than I was.

Now, to try to finish the post...of course, this is going to involve whacking the internet with a stick...more than once. (Really?! Don't I already look unprofessional?! And the internet is still phasing in and out...some trickster god loves me.)

In the Ancient Egyptian calendar, there was 360 days originally. Historically, this led to a small problem of the calendar not matching the actual time of the year. It would not have been so bad if the Ancient Egyptians had not tied their festivals and planting to the 360 day calendar. After awhile, a long while (centuries and centuries), the calendar said that one should be planting in the middle of winter or the dry heat of summer (I always forget which one--having just three seasons throws me for a loop also).

So here we have one of the first recorded instances of a calendar designed for religious purposes being terribly out of sync with the local realities. (The modern day example of this is the attempt to use the British Traditional Wicca holiday schedule in Australia...I will leave that one to your imagination--mainly because I live in Colorado, and my image of the scene involves several feet of snow...which I do not think that they get in Australia.)

So the Ancient Egyptians attempted to fix the calendar by adding five more days to it. These days were given religious significance by linking them to a myth that Thoth (Tehuti) won them from the moon god Khonsi in a game, and linking them to the birth of the five most troublesome deities of the Egyptian religion--Osiris, Horus (think Horus the Elder and not the son of Isis and Osiris), Seth (Set), Isis, and Nepthys.

And the calendar was still slightly wrong. Of course, one wonders the difference between "wrong" and "slightly wrong"--which sounds like the difference between "pregnant" and "slightly pregnant." Anyways, the calendar was still a quarter a day too short, therefore still out of tune with the local reality. But at least, it was a step in the right direction.

(At this point, I am going to hit save because the wind is picking up--just in case.)

(And back to writing this. Good thing, I already have that BAD reputation as being a clown and comedian...because I am not sure what people are going to think that only see parts of this post as it is being written...I normally try to cut out some of the thought process [insanity] out of the final edit.)

Now, if I was to just think about what is in my belly at the moment, without the aid of any divination tools, I would have to say forgotfulness, laziness, panic (oh, lots and lots of panic and anxiety), doubt, and stupidity. Or as I like to label, "depression and its aftermath." Then again, that is every day for me.

(I would go into more detail...but I imagine reading about depression is depressing.)

(And now, I hear two cats wrestling. Or at least, I hope that it is wrestling.)

So I presume that this is not what is actually driving me. Or maybe this unholy five of the great monster depression is what drives me.

(At this point, a phone call happens--involving the subjects of money and depression...and the debate of whether my depression is chemical or just bad programming.)

Back to the post writing...which writers and bloggers know is hard to get back into (supposely when you are still partially depressed and panic ridden).

But what if these are not actually the things that drive me?!

Fortunately, I have Thoth to help me. Thoth in the form of a Tarot deck (and I have no idea which deck this Tarot deck is...doesn't matter, I hope). I can do a divination to see what is deep in my belly, driving me forward (hopefully forward--I might be going around in circles).

Using the suggested questions that the organizer of this particular Tarot Blog Hop suggested--"What is in my belly? What is in my Spring? What shall I Birth in this season?"--I pull some cards.

(And disturb a sleeping cat by shuffling the Tarot deck.)

The Hermit, Three of Wands, and Ten of Cups. And they are ALL REVERSED. 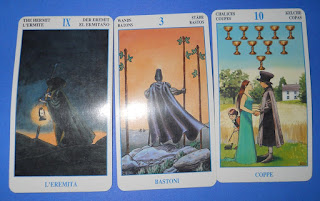 The Hermit card of this particular Tarot deck is rather dark (again, I have no idea which deck this is). The only bits of light are the Hermit's lamp and a glow on the horizon...sunrise? sunset? I am guessing that it is supposed to be sunrise. (As a member of Golden Dawn, I am supposed to associate the Order with sunrise...but given my most famous interactions with the community, there are moments that I think sunset is more appropriate.) Given the three cards together it might be something that I just accomplished...or maybe failed to accomplish.

(One of the problems with reading Tarot cards when you are slightly depressed is the fact that one tends to fall towards the gravity of the darker and more depressing possible readings of the cards. Perhaps, one should not read the Tarot cards while depressed.)

The second card (and remember that these cards are all reversed--I photographed them upright just to make it easier to look at for my readers) is the Three of Wands. This is a card of waiting. On the horizon, there are two little boats. Being reversed, I would argue that perhaps one should not wait for their ships to come in...because it is probably not going to happen.

The final card is the Ten of Cups...and being depressed (slightly or greater), one cannot help but feel despair that one will never be happy again. And in my own personal universe, I can't help but notice the turtle that the little girl is poking (the last project I was working on was "Meet Turtle Monkey"). Being reversed, this card does not comfort me at all.

Of course, as I said, one should not read Tarot cards when under the depression or anxiety, the readings tend to be not helpful, and just emphasize the fact that one is not in a functional state of mind.

So what is in my belly? Yes, that is right--the five children of the dark mother depression.

I think that it is going to be a long dark spring for me.

(And I am too depressed to write--I think that a nap is in order. And my wife just walked in the door, and the phone is ringing again.)

As I noted earlier, this post was originally part of the Tarot Blog Hop, which means that some of you were supposed to come from Joy Vernon's blog, and proceeding to the blog of US Games. Feel free to pretend that I actually was part of the Tarot Blog Hop and visit their fine blog posts. (I presume that they write fine blog posts...they have to be better than this one, right?)
Posted by Morgan Drake Eckstein at 9:00:00 AM

This really tickled me! I hope to see you next Blog Hop -- or even just a really entertaining explanation of why I shouldn't have followed the hop here. x

Hang in there, Morgan.

Cat scuffles here are usually accompanied by screams of "I'm being murdered" to unholy, somewhat satanic, and incredibly loud growls. As long as there's no blood and all limbs are present I consider them both okay, but the little beggars are experts at diverting my attention when I'm trying to get something done!

Huffing and snorting as if about to throw up seems to be another tactic to bring me into the kitchen for food, the bedroom for sleeps, and the sofa for cuddles ;)

Blessings, Morgan! I am late going through the hop, and likely won't get around the circle until this evening, so your blog was actually seamlessly linked where it should be. It's all about timing, I suppose.

Hugs. Trouble with depression is, it has no meaning, just chaos of feeling, so the cards reflect that.

I did find your slightly attention deficit blog quite funny, though; you are a very good writer.

You always deliver and this was an excellent, introspective, belly-facing post. Well done, MonkeyMan!

Thanks for the giggles Morgan!

Some ideas on the reversals from a crazy, pregnant lady from across the pond:

The Hermit: Get out more, STOP being so introspective and see the light shining outside and in others.

The Three of Wands: You're waiting for what? It's not going to come sat on your lovely arse! ;)

Ten of Cups: Okay, so you're not happy but you can go and do something about it and decide what does and doesn't make you happy!

these should be very encouraging cards, that they are reversed suggests only that you are not seeing their potential. The Hermit is not all about hiding in a cave eating juniper berries. he is a guiding light and a guide - you do not need to do this alone. He can't do the work you need to do to get back into the light for you, but he can show you the way. Find your guide and let him enlighten you.