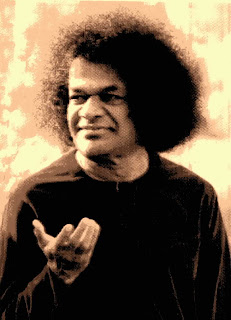 Sathya Sai Baba, born Sathyanarayna Raju (23 November 1926 to 24 April 2011), has passed away. This story would have probably passed me by if it wasn't for the fact that a friend of mine (not a member of Bast Temple) has a picture of him in her temple room. While he was alive, there was some debate on whether he was a fraud or not. I am not sure that practicing sleight of hand makes the message corrupt or not. After all, I have seen worse from others. My favorite quote from the man is something that he said about the Narasimhaiah Committee, which was created to study miracles and other superstitions. Being challenged to perform his miracles under controlled scientific conditions, Sathya Sai Baba replied, "Science must confine its inquiry only to things belonging to the human senses, while spiritualism transcends the senses. If you want to understand the nature of spiritual power, you can do so only through the path of spirituality and not science. What science has been able to unravel is merely a fraction of the cosmic phenomena." Whether you take that statement as a spiritual lesson or the statement of someone who does not want to be tested because he is conning people depends upon your faith and your opinion of the man and his message. Personally, having not dealt with the man or his organization, my opinion is still on the fence. Rest in Peace Sathya Sai Baba.
Posted by Morgan Drake Eckstein at 5:45:00 PM

Email ThisBlogThis!Share to TwitterShare to FacebookShare to Pinterest
Labels: gurus