In my opinion, one of the more interesting aspects of the Golden Dawn, or rather the R.R. et A.C., is the color scales.
I am not an artist; I merely live with one, and hang out occasionally with her friends.
Yet when experimenting with the color scales, I feel like an artist.
Here are three of my attempts to get the scale of the 12th path, Beth in the world of Assiah correct. 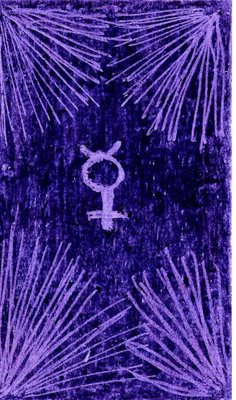 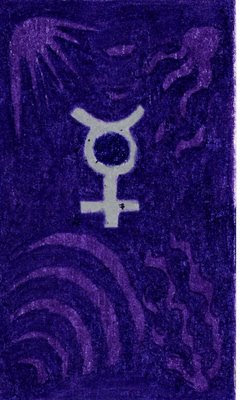 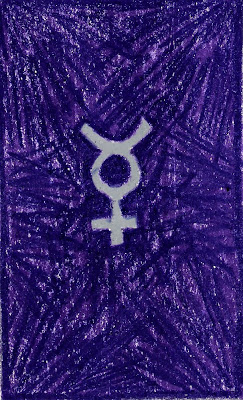 The first image was done with crayolas (what you don't have any?); the other two were done with color pencils.

Posted by Morgan Drake Eckstein at 7:58:00 PM No comments:

Lineage: what we can be sure about it

One of the concepts in Golden Dawn that creates a lot of smoke, but very little heat is lineage. A lot of people talk about it as it if it is the heart and soul of Golden Dawn. Especially those who are in the business of selling you the product of their Order.

But is it that important?

I would have to say no. Ultimately, it is the work that is the important part of the system. The world best lineage and a ten dollars will pay you a cup of coffee (presuming of course, that Starbucks has not raised their prices since this morning).

I was told by the people that brought me into Golden Dawn that "The only thing that you can know for sure about your lineage is the people who were in the room during your initiations; everything else is merely hearsay."
Posted by Morgan Drake Eckstein at 3:26:00 PM No comments:

Earlier this week, I read a posting on one of the Golden Dawn forums about how does a group get to be recognized by others, and who do they ask to be recognized. After I wiped the cola off my computer screen, I told the poster my opinion of the issue; basically, I would rather do the work than fight for recognition.

Recognition is a concept that came out of Freemasonry. To have your lodge recognized by a Grand Lodge is to have it regarded as being legitimate, and allows the members initiated into your lodge to attend other lodges that recognize your lodge. The reason this is so important in Freemasonry is that Freemasonry is NOT an unified worldwide Order. Rather it consists of a number of Grand Lodges (or Orders as we in Golden Dawn would think of them).

Some of my favorite quotes about the matter comes from Christopher Hodapp's Freemasons For Dummies:

"Freemasonry is not like a corporation or a single, solid, worldwide entity. As a result, no one owns the worldwide trademark to the square and compass logo, and no one can claim he holds the universal copyright on Masonic rituals. It would be like the Methodist Chruch claiming it holds the universal rights to all trademarks, symbols, and sacred texts of Christianity. The Methodists or Catholics or Baptists can't keep a new Christian group from building a chruch and placing a cross over its altar, or stop its choir from singing 'Onward Christian Soliders.'"

"Likewise, Grand Lodges can't stop a group of people from obtaining Masonic rituals out of a book, buying a stack of aprons and officers' jewels, and claiming that they have their own Grand Lodge. Like the branches of the Christian churches, there have been arguments and schisms between differing Masonic groups over the centuries, and factions of Masons have started their own Grand Lodges."

"So who gets to decide who is 'mainstream' or 'legitimate'? Well, in Freemasonry, as nasty as it may sound, might makes right in most cases, and it's a pretty tight club. The big group of mainstream Grand Lodges represents the greatest number of Freemasons in the world. As the 800-pound gorillas in the Masonic Universe, they get to collectively make rules they all agree to abide by."

"None of this is a huge issue to the individual Mason until he starts to travel and visit other lodges or encounters other Masons. An irregular [non-recognized] Mason will not be welcomed into a mainstream lodge, and his degrees and documents will not be considered legitimate. He will not be entitled to the honors, benefits, and fraternalism enjoyed by millions in the Masonic world."

Some parts of this reminds one of the situation in Golden Dawn; other parts do not (can you imagine Golden Dawn having millions of members; I can't).

For instance, Golden Dawn today consists of many different Orders (or Grand Lodges if you will). None of them can claim to hold the exclusive copyright to the Golden Dawn rituals, though certain members like myself can claim the copyrights to our own work and modifications that we have made to the system.

But unlike Freemasonry, in which Grand Lodges have agreed to recognize each other, Golden Dawn have little mutual recogntion. For the most part, a lot of the Big Name Orders do not recognize each other and/or are at war with one another. (I wish that I didn't consider it war, but with how nasty some of the battles have been...) Odds are that if you are in Golden Dawn, you are considered to be irregular by someone else.

And the cherry on top is the little trademark legal war that periodically flares up. Unlike Freemasonry, Golden Dawn has fought its most important recognition battles in court.

That is why I don't think anyone serious about doing the work should get involved in trying to gain recognition. As a tradition, we are too fragmented to justify the effort. At this point in time, it is better for us (outside of the Big Name Orders) to just do the work, and leave the worrying about who is legit and who is not to those who worry about such matters. And pray that we ourselves never grow to the size where we find lawyers on our doorstep.

For myself, I don't recognize any particular Golden Dawn group as legitimate. Why? Because I judge people by their skill and knowledge of the tradition. Have they done the work? If so, then I recognize them; if not, I chose not to associate with them. For me, recognition is an individual award, and not something given over to an entire Order.
Posted by Morgan Drake Eckstein at 12:31:00 PM 1 comment:

One of the things that can be said about occultism is the tendency of many to write about it in an extremely dense manner, so wordy that one needs a hammer and chisel to figure out what they are going on about. This may or may not be a bad thing depending upon what your purposes are. If your purpose is to figure out what the writer is going on about, it is a bad thing; if you are trying to conceal something, then it is a good thing.

I was reminded of this today when a new writer got added to my “What is this writer prattling on about” list. I tried to figure out what they were talking about, but gave up after a few minutes and several articles. If I want to work at chiseling meaning out of something dense and convoluted, I have pretty of university homework to do.

Basically, if it takes you forever to get to your point, or if it is concealed under layers of nonsense, I wander off and start doing something else. I suspect that the same is true of many readers.

So why do people write about the occult, and magic, in such a manner? My current theory is that they are trying to conceal how much ignorance they have about the subject; they figure if they imitate the classical writers on the subject (or academic writers) that no one will notice that they have not a clue. Or that they are trying to attract a following that associates that style of writing with knowledge and scholarship.

Personally, I just find it easier to admit that I don’t know everything. It saves time and effort for both me and my readers.
Posted by Morgan Drake Eckstein at 4:38:00 PM No comments:

Stephen Skinner's book, "The Complete Magician's Tables", is essentially an expansion of Aleister Crowley's "Liber 777." Skinner is not the first person to expand Liber 777, but this is the most extensive expansion of that work I have seen. Liber 777 was based on a Golden Dawn document, "Book of Correspondences"; in modern times, students of the Golden Dawn tend to consult Crowley's work (which was reprinted in 1973 along with "Sepher Sephiroth" as "The Qabalah of Aleister Crowley"), rather than the original document assembled by Samuel Liddell MacGregor Mathers and Dr. William Wynn Westcott for the Esoteric Order Golden Dawn in the Outer and its Rosicrucian Second Order, the Rosae Rubeae et Aureae Crucis (Ruby Rose and Golden Cross). To read the rest of the review of Skinner's "The Complete Magician's Tables", click here.
Posted by Morgan Drake Eckstein at 1:08:00 PM 1 comment: