Why Bast for Temple patron? 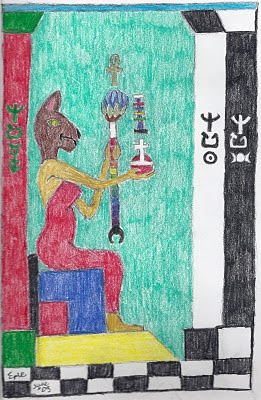 One of the comments that I recieved on an earlier blog post asked,"Why did Bast Temple chose Bast as our Temple patron goddess?"
To be honest, it started out as an insider joke. Three of the original members of Bast Temple had been part of another group. It was a loosely formed study group, which had two levels (the beginners and the more advanced).
(If you are curious, the group was called the Evolving Order of Eclectic Ways. BIORC almost ended up being called the Evolving Order of the Golden Dawn as a result of this. One of the reasons that BIORC did not end up under the Evolving label was that the initials would have been the same as those used by the Esoteric Order of the Golden Dawn [EOGD]. There are other reasons for BIORC to have been chosen as the rest of this entry will show...though many will argue they were not good reasons at all.)
One of the jokes that came out of the advanced circle was that the cats were really the Secret Chiefs. This joke slipped into the beginner circle which was led by two of the members of the advanced circle. This joke then slipped into the lodge as it was being formed.
Now I know a lot of people are going to be up in arms about this. And it does not matter...those who will be upset don't consider Bast Temple a real Golden Dawn lodge in the first place, therefore we do not have to maintain appearances just to please them. We can tell the truth; selecting our Temple Patron was the result of a joke.
But here is the kicker----despite the choice starting out as a joke, it worked just as well as if we were assigned this Patron from on-high.
For instance, each member of the original membership had at least one cat. May not seem important until you realize that we still have a Temple Kitty, who comes and checks out the new members (hence the question "Are you allergic to cats?"). The behavior of the cats are tracked by the voting members...the cats' opinions of applicants is often better than the humans.
This has lead to some interesting imagery used during lectures. For instance, the lecture where it is stated that the behavior of the Secret Chiefs in Golden Dawn history is much like the actions and behaviors of a cat. If you want to understand the Secret Chiefs, learn to understand the behavior of cats.
This choice of Bast and reason for it has some side-effects. For instance, we have learned that if you get upset by this set of jokes, then you are really not a good fit for membership in Bast Temple. Cat jokes are the least of the strange humor that one has to put up with as a member of Bast Temple.
The house that the meetings ended up being moved to during the second year of Bast Temple's existence came complete with its own feral cat colony. (For those who are curious: yes, the members of the feral colony were trapped, fixed and released [two males had to be put to sleep because of disease]. Today, they get a twice daily offering of food.)
As for the name BIORC, or more properly Ba Iset Order of the Rosy Cross, the reason for that is one of our members encountered a theory that Bast (Bastet) was really short for Ba Iset, the heart of Isis. Not a theory that one would place much weight on, but it has a nice ring to it, hence it being used as the Order name (just in case, we ever need it).
So there you have it, the reason for Bast to be selected as Temple Patron was that the goddess appealed to every cat owner in the group, and made for some really good humor. The fact that it serves as a signpost warning for those who would not be a good fit for entry in this particular Golden Dawn lodge is a nice side-effect.
(And in case, you are curious: a lot of magical work has been done with this godform. It may have started out as a joke, but it has become a rather interesting magical tool. It is probably safe to say that the Egyptian goddess Bast is pleased with our choice of Patron.)
Posted by Morgan Drake Eckstein at 1:10:00 PM

:)What a wonderful, lovely post Morgan. Your temple sounds very cool. I love the cat/Secret Chief connection. Could explain many things :)

I knew a man who once said that after he'd built a big expensive house he and his wife were rarely home because they both worked so much, and his kids were rarely home because they were busy being teenagers and students. So the only ones who spent their days at home were the cats. The cats were the beneficiaries of all his and his wife's hard work. They were working for the cats. Good to realize who's running the show.