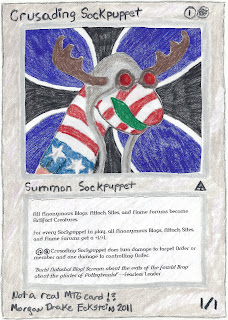 It is now time for another installment of Magic the Gathering NOT. Today's masterpiece is the Crusading Sockpuppet, a 1/1 creature with a casting cost of one white and one generic mana. It taps for the cost of one white mana to deal two damage to a target player (Order) or creature (member), and also does one damage to its controller. I am not exactly sure that is realistic, but I don't have the numbers to prove that it is not either. In my previous installment, I mentioned that the Anonymous Blog is a broken card, and this card is one of the reasons why it is broken. When any sockpuppets come into place, all the Anonymous Blogs (along Attack Sites and Flame Forums) become Artifact Creatures. For every sockpuppet in play, the Anonymous Blog (again, along with the Attack Sites and Flame Forums) gets a +1/+1. There is a drawback; if all the sockpuppets are removed from play, you could lose all the Anonymous Blogs (once again, along with the Attack Sites and Flame Forums). I had fun creating the picture for this one. Yes, it is a cross between Rocky (the flying squirrel) and Bulwinkle (the moose). The flavor text refers to Boris Badenov and Natasha Fatale (everyone's favorite nogoodniks), as well as the ever-famous Fearless Leader. I wanted to use the Pottslyvania flag in the background, but I could not locate a picture of it (all I know is that it is black and blue), but I know that the Iron Cross was used on the aircraft (gee, I wonder who Jay Ward was mocking). One of the odd things I discovered while looking for a picture of the Pottsylvanian flag was the fact that a few of the espisodes opened with a Bullwinkle puppet. In one opening, the puppet told the kids to remove the dials from their televisions. Some kids actually listened and did so, leading to complaints from their parents. And so it goes. For those of you who are curious, I did see the movie with Sally Kellerman and Dave Thomas; I thought it was clever...obviously I am a nerd.
Posted by Morgan Drake Eckstein at 12:23:00 AM

Email ThisBlogThis!Share to TwitterShare to FacebookShare to Pinterest
Labels: Magic the Gathering NOT, sock puppet

At some point you should add an "Astral Initiation" card to your deck. When played against an opponent it transfers mana from them to you and does nothing else. The image on the card could be the Kerux holding a sock puppet.

And to think I once seriously believed I had the most twisted sense of humor in our community. As it turns out, I bow before superior satire. Bravo!