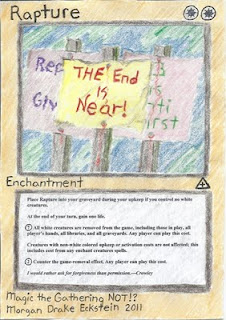 Yes, it is time for another installment of Magic the Gathering NOT!? the game that is fun for all spiritual grades of attainment. And today, we are allowing the doomsayers to play by introducing one of their favorite cards---the Rapture, an enchantment with a two white mana casting cost. Rapture goes into your graveyard during your upkeep if you control no white creatures; at the end of your turn, you gain one life. But wait! There is an added benefit. For seven mana, all white creatures are removed from the game, no matter whether they are in play, in a hand, in a library, or in a graveyard. No pure thing can hide from the Rapture. Unpure beings, such as those who have additional colored casting costs, upkeep costs, or activation costs are exempt from being raptured; this includes those pesky enchant creature spells. Don't want the unpure from enjoying heaven, now do we? And the real joy of this card is that anyone can activate this creature removal ability; all they need to do is pray and play the activation cost. Inconvenient? Doesn't match your math and announcements? You can prevent the effect by paying just two mana. And so can any other player, which allows you to claim that the timing was not right and it wasn't your fault that the math was wrong. Yes, the Rapture is a card sure to pick up the game for all those true believers. Plus, it is great for cult based decks---just add kool-aid. [Artist's note: the flavor quote, "I would rather ask for forgiveness than premission" is not by the Crowley most occultists know and have been loved by; it is actually the Mark Shepard version of Crowley (a crossroad demon, who became king of hell) from the Supernatural television series. I might be a geek.]﻿
Posted by Morgan Drake Eckstein at 1:29:00 AM

Email ThisBlogThis!Share to TwitterShare to FacebookShare to Pinterest
Labels: doomsday, humor, Magic the Gathering NOT

Nice interpretation of the Rapture! I like the Math requirement.

You, a Geek? Why of course! *chortle*

Chortle, by the way, was invented by Lewis Carrol. I Am a Geek.