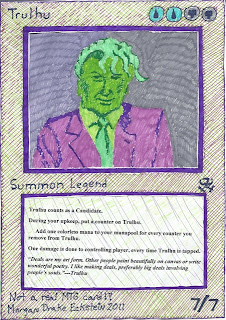 Normally, I try to keep real-world politics confined to my rarely-updated political blog, Bag Full of Tricks (where you can see the bottom half of the artwork of this particular card). But this was 1---too good of an idea to toss into the "too late to do" waste-basket, and 2---I think that some of my readers here would get a laugh out of it. This card is another of my Magic the Gathering NOT series (note that it is the Elections 2012 Torture Set and not my yet-to-be-named mocking the Golden Dawn internet community set). The idea for the picture came when I realized that I would rather vote for the thing on Donald Trumpt's head than the man himself. Then I realized that the thing on his head reminded me of something out of H.P. Lovecraft's Cthulhu fiction. Then Trump decided he would rather not run for President---as if that would stop me from using this idea. Trulhu is a Legend (because Trump thinks that he is a legend, and I hope that there is only one of him---I also hope that there is only one of those things that he wears on his head). Trulhu, the thing on Trump's head is a 7/7 creature that costs two black and two blue mana to summon. On every upkeep, the controller places a counter on Trulhi; these counters can be removed when Trulhu is tapped (I forgot to add the tap symbol---opps), and add one colorless mana to the player's manapool for each counter removed. The big drawback is that every time Trulhu is tapped, one damage is done to its controlling player. The quote is actually based on a real Donald Trump quote, except that I tossed in the part where souls are involved in the deal making. "Deals are my art form. Other people paint beautifully on canvas or write wonderful poetry. I like making big deals, preferably involving people's souls." Here is to the long Presidential season that we are facing here in the States---I hope that we survive it with minimal damage. ﻿
Posted by Morgan Drake Eckstein at 12:12:00 AM

Email ThisBlogThis!Share to TwitterShare to FacebookShare to Pinterest
Labels: humor, Magic the Gathering NOT, politics

Ok, that was just too funny!

The thing on Trump's head...on a MTG card. I like your humor, MDE.

I have an idea of your MTGN deck. It is the self destruct card. It has a picture of the Enterprise star ship counting down it's self destruct sequence. Using it destroys the player but also damages all the other players too.