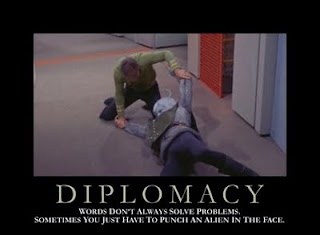 ﻿
As most of my readers know, David Griffin of the HOGD/A&O has recently associated himself with Captain James T. Kirk, and his friend, Tomas (SR) with Spock. The association of the Federation with Golden Dawn puzzles me a little because there are moments that I am not sure if it is just his Order that he is connecting it with, or if the association refers to all honest magical branches of the tradition. This association has led to some strange mental moments on my end---now I cannot help but think about Griffin whenever I run across a picture of William Shatner's version of Captain Kirk. Sometimes it leads to me laughing out loud at a picture because it now has a completely new subcontext to me. And this picture is an example of one of those moments. I have no idea whether Griffin would approve of this statement or not ("Diplomacy---Words don't always solve problems. Sometimes you just have to punch an alien in the face."), but I could hear Griffin saying it because of this association. Now I do know that Griffin will see the humor value of it---I must admit that Griffin goes out on a limb occasionally to be able to use a good line or poke some fun at a situation (look to what he was willing to do to be able to use the line, "I am the real McCoy"---that was an association that I wouldn't have touched with a ten-foot pole; both sides of that conflict were out to lunch). I may not agree with Griffin about some things, but I do admire his willingness to go for a laugh.
Posted by Morgan Drake Eckstein at 6:33:00 PM

I think he has the wrong Shatner character. I see more Denny Crane in him http://en.wikipedia.org/wiki/Denny_Crane

Just wait until the Organians (not Oregonians) get involved.

They will forge (force) a peace treaty, like they did between the Federation and the Klingon Empire.

Now that conjures a comical image:

Griffin and Zink squaring off in Judo stances, wands at the ready (Zink is the swarthy bearded Klingon with a penchant for not seeing reason and babbling idiocy), and suddenly the Organians appear.....

Have to be a Trekie to get the references.

In all seriousness, though, I always thought the ideas and aims of the Star Trek Federation were the result of humanity's higher evolution. In that sense, humor aside, I like the association that Mr. Griffin has made with Star Trek and the HOGD/AO.

I miss Boston Legal. Denny was my favorite character on it.

Here is a hot potato question for the Golden Dawn and wider esoteric community:

Imagining for a moment, some sort of Federation of Initiatic Orders and Temples along the lines of the United Federation of Planets in Star Trek ...

What should be our Prime Directive?

All I have to say is that when David has disposed of the Romulans I really hope he starts chopping hotel prices "hi-ya!"