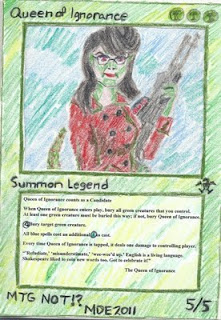 This is one of those times that I can tell that I am more interested in the concept than actually getting the art right. Believe it or not, this was originally meant to be a picture of Sarah Palin. Yes, once again, I am poking fun at politicans. Of course, if Palin decides to run for President in 2012 and wins, I will be shot or imprisoned; after all, according to Sarah Palin, freedom of the press is all about saying nice things about Christians, Republicans, and our reptilian Overlords. The media picks on her too much, and the blogosphere laughs whenever she says something---we take her quotes out of context all the time. It is so sad. For instance, the flavor quote on this card is an actual Sarah Palin tweet: "'Refudiate,' 'misunderestimate,' 'wee-wee'd up.' English is a living language. Shakespeare liked to coin new words too. Got to celebrate it." Instead of admitting that she is as great of a writer as Shakespeare (William is rolling over in his grave), we crown her the Queen of Ignorance. And that is just wrong. Of course, if Palin had the brains to play Magic the Gathering, she would realize that the mechanics of this card are mocking her also. Queen of Ignorance is a 5/5 legend, which costs three green mana to cost. When the Queen of Ignorance enters play, all green creatures that the player controls must be buried; at least, one green creature must die for her to materialize. All blue spells cost an additional blue mana to cast. Queen of Ignorance can be tapped to bury a target green creature. And just like the real Palin, everytime the Queen of Ignorance is tapped, she deals one damage to her controlling player. Yes, I think that Palin will close all the libraries, kill all the animals, set fire to all the forests, and generally hurt the Republican Party everytime she opens her mouth. ﻿
Posted by Morgan Drake Eckstein at 2:04:00 AM

Email ThisBlogThis!Share to TwitterShare to FacebookShare to Pinterest
Labels: Magic the Gathering NOT, politics