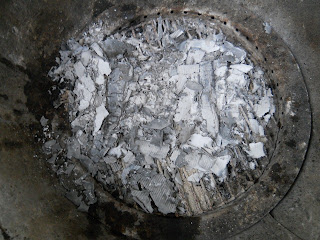 For those who attended the June Hearthstone Community Church's Open Full Moon Ritual, where I told three slightly warped myths, and for those who could not attend (but are still curious): Here is a picture of the remains of the "undesirables," those things that we did not want to have in our lives anymore. (Information for those who did not attend:) We gathered a little note from everyone stating something that they did not want in their lives, and placed the notes in a shoebox coffin and duct-taped it shut. The shoebox was burned in the possession of the other lodge members that weekend (because it wrong to burn things in a church that has already suffered a major fire). We discovered that duct tape burns faster than paper and cardboard---a helpful tip that I might use for magical effect in the future (I do a lot of fire sacrifice magic). The reason for the photo being posted so late is simply that it has been sitting in the camera for days on end.
Posted by Morgan Drake Eckstein at 4:08:00 PM

How does a picture sitting in the camera for days on end cause it to be posted so late?

It just refused to budge? It was all, fuck you man, I ain't doing' shit!?

Do better behaved photos take a little initiative and move themselves right to the post usually?