Welcome to this edition of the Tarot Blog Hop. Today's topic is Love. And while there is a part of me that wants to talk about romantic card spreads--it is a really small part and easily beat up by the part of me that loves collecting Tarot cards and pictures of decks that I do not own yet.

One of the things that I really love about Tarot is the sheer amount of artistic creativity that has been poured into the Tarot over the last few decades. In part, this has happened because of technological advances--in fact with the advent of print-on-demand, I expect there to be an explosion of new artistic Tarot decks (some of which will only sell a handful of copies...and so it goes).

So let's take a look at some of the artwork that people have done Tarot-wise.

For the purposes of this post, I am resorting myself to the Sun card--I could have chosen any of the cards to feature today, but I recently saw a version of the Sun card that really made me want to talk about the Sun card. So here goes...

This version of the Sun card from the Vampire Tarot I find very interesting. Most Tarot decks portray the Sun card in a hopeful positive manner. Not this deck, this version is, well exactly how a vampire would look upon the sun, as a destructive force and quite life threatening.

Now, while the Vampire Tarot version of the Sun made have determined the choice of card today, don't blame that deck completely for my choosing of this Major Arcana for our tour today.

This one is not as creepy...unless you find naked angels creepy...which some people might. I do like this deck because it has a (faulty) cheat for remembering where the Major Arcana are located on the Tree of Life. 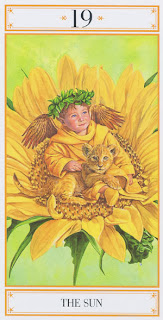 The artwork is quite nice on this version (Un Mei, I believe that it is from); plus there is a small lion cub--you must love lion cubs, especially if you are like me and work with Bast on a regular basis. 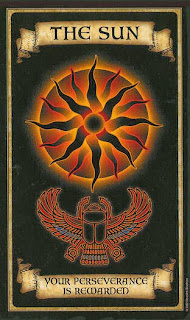 This card is from an Oracle deck--the Madame Endora, I think. I like it because of the mix of Egyptian and the art style. Therefore, while Oracle decks are not really Tarot decks (or that is the answer that I am using today), I am including this card in today's tour of Tarot artwork. 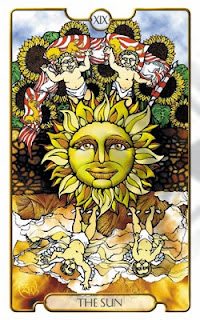 This card from the Adflatus deck (?) is a little busy, but cheerful. I am not completely comfortable with the lower half of the card, but it does have its own particular meaning as you probably can quickly grok. 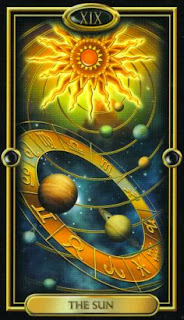 The direction of the zodiac wheel in this version of the Sun card--from the Gilded Tarot--might disturb some people. Especially those people who like to argue about the placement of the zodiac in a Golden Dawn lodge. 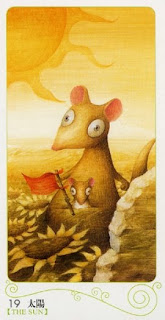 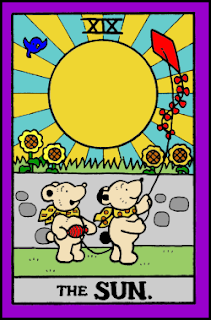 Here is another whimsical Sun card. This one is from the rather expensive Hello Kitty Tarot deck. Should kids play with Tarot cards? Maybe, maybe not. But if you own a copy of this deck, the answer is a screaming Nnnnoooooo!!! (This is one of the most expensive decks that I have looked at in recent days.)

What version of the Sun card is my favorite? Oh, that is just a silly question, isn't it? My own version, of course. 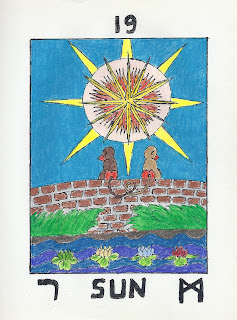 After all, what type of artist would I be if I did not like my version the most of all? Of course, I may never finish my Monkey Tarot deck--but darn it, this version of the Sun card is my all time favorite Sun card.

So what version of the Sun card is your favorite?

I'd never seen the Vampire Tarot's Sun before, but I kinda like it! I find a lot of the Sun cards a bit creepy too...The Mystic Spiral version is pure sunshine.

Well... I'd not thought of the Sun card before now as being creepy... but I see where you are coming from... I'm going to be pouring through my decks now with a new slant ... Thanks Morgan! As if I don't already find enough ways to wander off on tangents... :D

Of these, I think I like the Gilded Sun best. Although I'm no vampire, I am well aware of the destructive power of the sun.

What a marvellous selection of cards - I can see why you luff these decks! I have the Mme Endora deck and it's a lot of fun to use when you are working the Fortune Teller vibe lol!

Nice! It's great to see all the Sun variations, and especially the Secret Tarot which should arrive on my stoop today or tomorrow (yesssssss...)

I love your tour of Sun cards! The one I've always thought was creepy was the kid on the Druidcraft Sun - looks like the Chucky doll with a really bright red sunburn!

Morgan, you are always crazee cool. You picked the most unlikely card to talk about during this period of the year but I ABSOLUTELY LOVE LOVE LOVE how you talk about them. I laughed so hard at your description of creepy Sun card. Now i need to go google the net for more creepy cards:D

I just realised I don't have a single Vampire Tarot in my collection which really surprises me! Love the first Sun card you posted. I did '21 Ways to Read a Tarot Card' with the Sun card from the Revelations Tarot and boy did I learn a lot about myself.

Great review of interesting, and at times, creepy Sun cards. I like the Legacy of the Divine Tarot one with the planetarium effect myself. Still, of your collection, I have to say the Vampire one is most impactful. I like the different perspective.

As a mother, naked children don't generally strike me as creepy. Now, if there was a dodgy old man peering out at them, that would be a different matter. Of the cards you posted, I think the Tarot of the Magical Forest's kangamouse was my favourite of the compeleted decks. Nothing can beat your Monkey Tarot Sun, of course! :D